Of course, there are TechNet/MSDN articles about just that but still we were cautious since while following the instructions, we soon bumped into this screen: 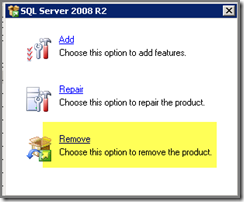 So we could click it and see what happened, but it didn’t feel right. It was a production SQL Server running another instance as well which wasn’t to be removed at all… So we could afford no risks here.

Important to know is that the SQL Server instance which we had to remove didn’t host any SQL Database anymore besides the regular system databases.

Before you start make sure there is a valid backup/snapshot/clone in place so you can go back when things go wrong!