Solid state hybrid drives or SSHDs are a combination of a traditional Hard Disk Drive with a small amount of SSD storage built into one Hybrid enclosure.

The partnership of SSD, for quick access data, and HDD, for long term inexpensive storage, means that users of SSHDs have the best of both worlds when it comes to storage and speed.

Fast access, commonly used, data is stored on the SSD portion of the drive and the larger less used bulk of data is housed on the HDD.

How does an SSHD work?

SSHD technology works by using a relatively small amount of high-performance NAND flash solid state memory to store the most frequently used data. This is the SSD portion of the drive, typically around 8GB in size, meaning files can be accessed far quicker than HDD.

The rest of the SSHD is made up of traditional HDD storage, usually 1TB and above, to hold the bulk of your lesser used files. This could be anything from games to video music and documents.

Since an average computer workload accesses a relatively small portion of the entire data stored, most frequently used data needed by the host computer will be located in the solid state memory when requested.

When this is the case, system performance improves because there is less time spent locating, reading and delivering data to the computer. 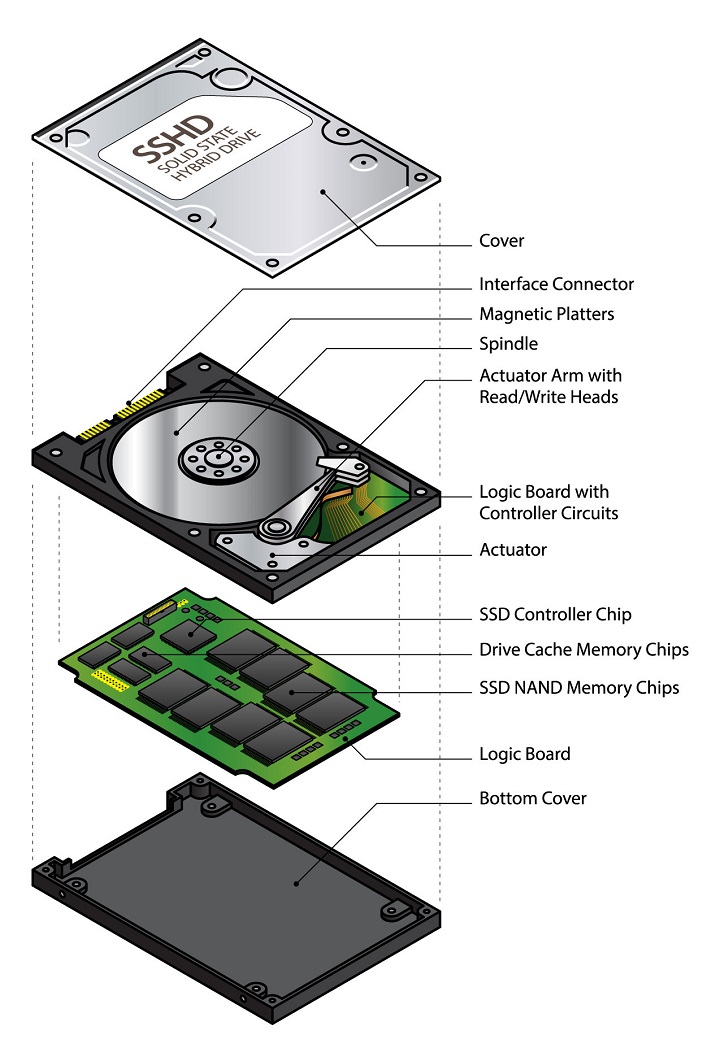 As we use different data at various stages of the day, SSHDs need to be adaptive when it comes to what file are stored where.

SSHD pioneers Seagate developed advanced algorithms to track data usage and prioritize frequently-used data for storage in the fast, solid state portion of the drive. This technology is adaptive, so as different applications request data over the course of a day, the system changes what data is prioritized as needed. The results are a performance profile very similar to native SSD products, with the added benefit of much higher total storage capacity.

So why upgrade to an SSHD and not just buy an SSD? Well, SSHD is currently the most affordable way to add both speed and capacity to your computer. Standalone SSD has the speed but is currently still quite expensive for capacities over 240GB. HDD is certainly cheaper in terms of capacity for money but it lacks the speed NAND flash storage. So why not have your cake and eat it?

Whether you’re into gaming, HD video, photography or music, digital content is getting better and bigger. With SSHD technology you don’t sacrifice massive capacity when you choose faster performance.

SSHD design allows for minimal writes to the NAND while simultaneously reducing wear and tear on the HDD portion of the drive by reading frequently from the flash. When combined, HDD and SSD technologies actually complement each other. The HDD handles most writes while reads come mainly from the NAND.

Yes, it’s a so-called ‘black box’ solution. An SSHD looks and communicates just like a traditional HDD, so it’s 100% compatible with you old system.

Can SSHDs be used in RAID configurations?

RAID 0 and RAID1 configurations have been tested with excellent results. 2 SSHDs in RAID 0 deliver performance as much as 70% higher than a single-drive configuration.

Seagate does not recommend mixing SSHDs with standard drives in RAID configurations, as this will negate the SSHD benefit. Further, Seagate has not conducted testing in common multi-drive configurations, such as RAID 5, 6 or 10, as current drives are not designed for multi-drive vibrations.

Who can benefit most from SSHD?

If you’re looking for the best of both worlds SSHD is for you. Whether you’re into gaming, HD video, photography or music, digital content is getting better and bigger so storage and speed is at a premium. With SSHD technology you don’t sacrifice massive capacity when you choose faster performance.

Gamers in particular can benefit from using SSHD drives – there are 3 main usage scenarios for which SSHD drives are ideal:

Upgrading to the 1TB version doubles the standard storage capacity of PS4, while also reducing boot up time and loading times for games, levels and terrain/maps. Reducing load times by even a few second per load increases the amount of time available for actual gaming.

Desktop SSHD can load games like Battlefield 3 over twice as fast as a standard 2TB HDD. This drive provides a hefty chunk of storage while saving money to spend on enhancing other parts of the PC – such as a better GPU, CPU or peripherals.

Performance of some cheap SSDs can drop dramatically when they become full with data. In Desktop SSHD the 8GB of NAND cache is only used for data that needs to be accessed fast, meaning they provide consistently fast performance.

250GB SSD is no longer considered large sized. 250GB SSD equates to around 230GB after formatting, you need 20GB for Windows 8, another 10GB for Program files, and new games can take up to 50GB each.

Data consumption is growing faster than price erosion of SSDs. The problem is: 500GB can be too expensive, 250GB too small… So, realistically with a 250GB SSD you’ll be left with 3 maybe 4 new games installed on the SSD. Everything else will have to go on a 2nd drive.

If you’re buying ‘Ultimate PC’ why would you want a standard HDD for your 2nd drive, when you can simply upgrade to a 2TB SSHD and have the best of both devices?